How to Develop Your Intuitive Mind: 4 Steps from History’s Greatest

“The intuitive mind is a sacred gift and the rational mind is a faithful servant. We have created a society that honors the servant and has forgotten the gift”. –Albert Einstein

Steve Jobs, Elon Musk, Newton, and Einstein all had one thing in common: they mastered the art of listening to and tapping into their intuitive mind to achieve missions that would change the trajectory of humanity. They took deliberate steps to answer the grand challenges of their time.

However, to become a game-changer, it is necessary to harness the power of the intuitive mind. In one survey, 72 of 83 Nobel Laureates in science and medicine, all implicated intuition in their success.

“Intuition is a very powerful thing, more powerful than intellect, in my opinion”. – Steve Jobs

The greatest hindrance to accessing your intuition is stress. People under significant stress use just a fraction of their mental and emotional capabilities.

Activating your intuitive mind requires, at a minimum, long periods of solitude. It comes with deep soul searching and spiritual reflection.

The power of intuition is ultimately what Jobs absorbed when he visited India in his early youth, before Apple Inc. Steve Jobs embarked on a 7-month spiritual quest to India and later encouraged several Tech titans such as Mark Zuckerberg also to visit to contemplate the future of his company. To date, Larry Page (Google CEO), Founder of eBay, and others have also visited.

After Steve Jobs left India, he embraced meditation and mindfulness for the rest of his life. Many high-tech offices have also employed mindfulness counselors to help keep employees focused.

Many great leaders are great because they did something almost no one else believed was possible — they set the direction of progress for generations to come.

They didn’t focus on just having a career or a job — they had a vision and a mission. For self-renewal, it is critical to refocus and set the direction of progress in your life. A new commitment to new priorities will also help keep hope alive.

Setting the direction of progress is the act of setting your goals and vision for your life. However, this isn’t about attaining position, fame, and power — as the be-all and end-all.

These goals should embody service to humanity and making the world a better place.

Learn How to Bend Reality and Create The Life You Want, Effortlessly in this FREE Masterclass>>>

Isaac Newton had what he called a “Waste Book,” where he stored any important passages from the texts he read. It inspired many of his discoveries.

Journaling can strengthen our intuition by helping us keep track of insights, visuals, and inspiration for ideas.

From his time aboard the HMS Beagle, a five-year expedition that helped lay the groundwork for his theory of evolution, Charles Darwin made it a habit to keep notebooks to record his thoughts and observations.

The journals, labeled only on their covers as A, B, C, D, and so forth, spanned everything from early sketches of an evolutionary tree to notes on geology, new species, and personal musings on family and friends.

There are lots of stories that describe Isaac Newton sitting under a tree when an apple suddenly falls on his head, and then he has this “Aha moment.”

What really happened was that he was in the orchard and witnessed an apple drop from a tree. Newton’s observation caused him to ponder why apples always fell straight to the ground (rather than sideways or upward) and helped inspired him to develop his law of universal gravitation eventually.

In 1687, Newton first published this principle in his landmark work, the “Principia,” which also features his three laws of motion. The principle states that everybody in the universe is attracted to every other body with a force that is directly proportional to the product of their masses and inversely proportional to the square of the distance between them.

As mentioned above, Isaac had what he called a “Waste Book,” where he stored any important passages from the texts he read. It inspired many of his discoveries. It is said that upwards of 1,000,000 words in his handwriting still survive. 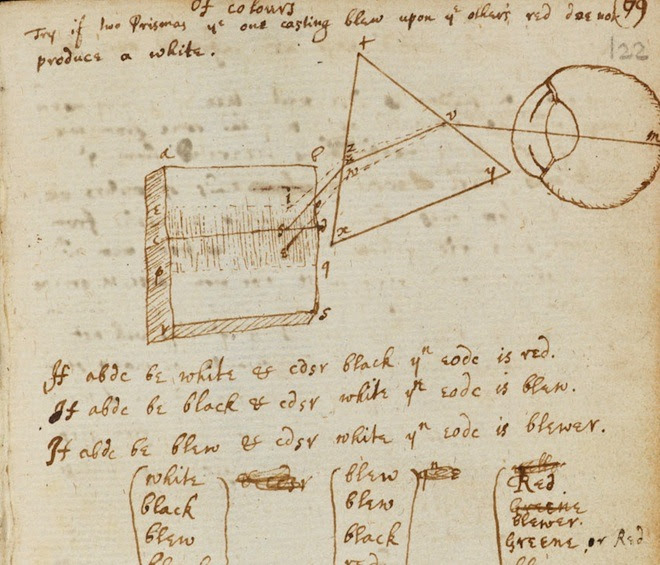 According to British Economist John Meynard Keynes, Isaac Newton mastered holding mental problems in his mind until he solved them:

“His peculiar gift was the power of holding continuously in his mind a purely mental problem until he had seen straight through it. I fancy his pre-eminence is due to his muscles of intuition being the strongest and most enduring with which a man has ever been gifted.”

Anyone who has ever attempted pure scientific or philosophical thought knows how one can hold a problem momentarily in one’s mind and apply all one’s powers of concentration to piercing through it, and how it will dissolve and escape and you find that what you are surveying is a blank.

I believe that Newton could hold a problem in his mind for hours and days and weeks until it surrendered to him its secret. Then being a supreme mathematical technician, he could dress it up, how you will, for purposes of exposition, but it was his intuitive mind which was pre-eminently extraordinary.”

Do you believe that you need to work hard to be successful?

Like most people, your answer is most probably ‘yes’. After all, it’s what we’ve all been brought up to believe.

The problem is that when you believe this, you start to lose yourself to the grind. You start to associate success with pain and struggle.


But What If You Didn’t Need To Suffer To Be Successful? Wouldn’t That Be Far More Sustainable? If That Sounds Good To You, Then...Join Vishen Lakhiani’s FREE Masterclass, Where He Shows You How You Can Attain Success Without Having To Suffer For It.

✅ The Myth of success, where Vishen reveals the ultimate myth of success that keeps us locked in mediocrity and prevents us from achieving our goals,

Learn How To Unlock Your Highest Level of Human Consciousness

Choose a date and time below to tune in to the broadcast in your own local time zone.

Keisha Blair is the author of Holistic Wealth: 32 Life Lessons to Help You Find Purpose, Prosperity, and Happiness. She has been featured in the Harvard Business Review, the New York Times and many other publications.